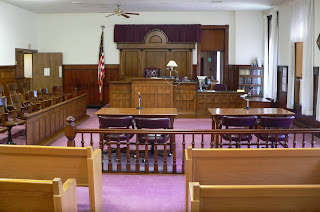 Anyone who reads this blog knows that I believe God positively wills many things that happen in our lives (others, discomforts, He permits - weaving them into His plan to draw us even closer to Him).  So when I was called for Jury Duty, I took it in stride.  I had no idea how long I would be asked to serve ... and there are always deadlines looming at work, but I trusted that the the Lord had His reasons for allowing my name to be drawn.  My hope was that He might have an appointment in mind - someone He wanted me to meet and converse with.  (Sorry, couldn't think of an unencumbered way to end that sentence other than in a preposition.)

Now most of my day was simply sitting in the jury selection room, finishing up two books I was in the midst of reading.  One of them was Dr. Scott Hahn's Consuming the Word: The New Testament and The Eucharist in the Early Church.  I changed my seat a couple of times, giving me a chance to stretch my legs and get a change of scenery.  Around 1:30 though I moved back to the row in which I started and began working on an article in the journal I had brought.

About ten minutes into my writing the young lady a couple of seats to my right said, "Excuse me, are you reading that book?"  She was referring to the book by Dr. Hahn.  "Yes, I just finished it as a matter of fact. Have you read other books by Scott Hahn?"  She had - The Lamb's Supper. (Alright, any conversation that begins with a mention of Hahn's Lamb's Supper within the first minute is going to be an awesome one!)  She went on to say that she had just been thinking she needed a new book about the Faith to read and when she saw my book sitting on the chair thought, "That could be it!"  We ended up talking for almost the next two hours straight - Pope Francis, our children, the Sacrament of Marriage, Humanae Vitae, the sanctity of the family, the insanity of trying to draw up "Five Year Plans," etc.

For a almost two hours I got to bask in the faith and witness of a young, working, thoroughly Catholic mom.  At the end of the day we were both excused from returning tomorrow. I am just very grateful to the Lord for letting my faith be built up by a sister - a sister that until today, I didn't know I had!  (Isn't Heaven going to be great?!)
Posted by Shane Kapler at 5:26 PM No comments:

Fasting - Has Anyone Else Had This Experience? 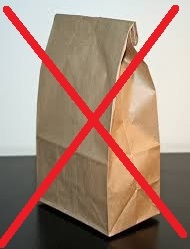 In my last post I reflected upon the value of fasting.  I also admitted that I have rarely practiced fasting outside of the Church's prescribed days.  In the past couple of months however, I have fasted for part of the day - small breakfast, skipped lunch, and then had a big 'ole dinner.  Here is something crazy that I've noticed though, and I would love to hear if anyone else has experienced it:  If I miss a meal in the course of a usual day - as when I forget my lunch at home - then I feel absolutely famished.  But if I tell the Lord that I am going to fast from lunch, then the hunger pains or either light, last for only a brief time, or simply never come.

I notice this on Ash Wednesday and  Good Friday too, when we fast for the entire day - the hunger is never as bad as I had expected.   Is there something psychological at work here?  When we are deprived of food against our will, we pine for it; but when we make an intentional decision to abstain from it, we don't hunger as greatly?  And if that is the case, then why do I experience hunger so strongly when dieting?  Does offering the hunger as prayer somehow change the psychological/physical experience?
Posted by Shane Kapler at 6:34 PM 2 comments:

Last night I woke up a little before 2 a.m., and decided to hit the fridge for a couple of pieces of the kids' left over pizza.  Like millions of others yesterday, I had joined Pope Francis in fasting and praying for peace throughout the world, and especially in Syria.  And I'll tell ya, after a good fast, Little Caesar's pizza had never tasted better!  As I sincerely thanked God for such delicious food, I recalled a story from Christopher West's At the Heart of the Gospel:

Teresa of Avila (one of the saints I most admire) was once caught by her sisters, in the middle of the night, scarfing down partridge.  Seeing the shocked looks on their faces their holy mother responded, "When I fast, I fast; and when I eat partridge, I eat partridge!"  It's a great lesson on why we Christians fast.  It isn't that food or our bodily appetites are "bad," or "sinful."  Rather, for a limited time, we seek the fulfillment of an even deeper hunger.  In yesterday's fast we expressed to God our hunger for peace in the world.

I don't know how many of us practice fasting, except on Ash Wednesday or Good Friday.  I've hardly ever done it.  When I began researching the prayer life of Jesus a few years back, and His teaching on prayer, I recognized that I was called - that all of us are called - to unite fasting to our prayer for great needs.  It was Jesus' practice; and in God's providence, it is a prerequisite for His release of certain graces.  Kudos to Pope Francis for bringing it into our prayers for peace!

Just don't let anyone get the wrong impression that we Catholics frown upon the feast.  We love to feast!  We've just found that the food tastes that much better after a day of prayer and fasting!

Posted by Shane Kapler at 11:46 AM No comments: 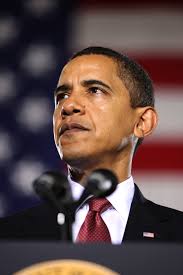 The latest soundbite from President Obama really strikes a nerve with me.  He asked the members of Congress to consider "what message will we send if a dictator can gas hundreds of children to death in plain sight and pay no price."  The President is talking about Syria of course, but we Americans - and especially us Catholic Americans - need to be publicly making this point to him and the hundreds of other lawmakers who support abortion.

He is morally outraged at the thought of Syria's President Assad using chemical weapons against the children of his nation.  Obama understands, and expects all of us to understand, that the killing of children is especially heinous and cannot be tolerated.  And yet, he supports the ongoing atrocity of legalized abortion, even going so far as to ask God to bless Planned Parenthood, our nation's largest abortion provider.

Why can't he see, why can't so many of us see, that when we support the killing of  unborn children, we degrade the lives of all children?  If Assad did use chemical weapons on the children of his nation, then he only took the evil we perpetrate upon our own children to its logical end.  We speak of the innocence of children, human dignity, and inalienable rights; and yet our nation has killed 53 million of its children since 1973.  We stand agasp at events such as the chemical strike in Syria and the shooting in Newtown, never stepping back to consider how abortion insidiously, subconsciously, lessens the value of all human life.

Mother Teresa saw this clearly and warned us:


"Any country that accepts abortion is not teaching the people to love, but to use any violence to get what they want. That is why the greatest destroyer of love and peace is abortion ... if we accept that a mother can kill even her own child, how can we tell other people not to kill one another?"