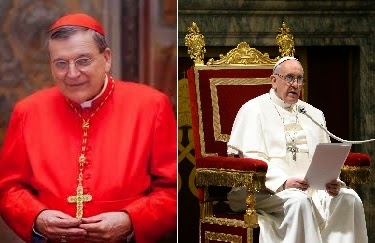 With all of the press coverage on the synod this past week, I had several opportunities to hear from my former shepherd here in St. Louis, Cardinal Burke. I wrote about Cardinal Burke in one of my first blog posts and how I admired his ability to take stands that were unpopular in the culture at large (even among large swathes of his flock) - but completely faithful to Christ and his duty as a shepherd.

When the release of the Extraordinary Synod on the Family's relatio post disceptationem (report after the debate) earlier this week caused tremendous confusion throughout the Catholic world, Cardinal Burke felt compelled to speak up as to how the relatio did not faithfully reflect the bulk of the conversation engaged in by synod participants. The Vatican released a new, more precise English translation days later; but it did little to allay the difficulties seen by synod participants.


In his interview with Carl Olsen, Cardinal Burke said:

"The document lacks a solid foundation in the Sacred Scriptures and the Magisterium. In a matter on which the Church has a very rich and clear teaching, it gives the impression of inventing a totally new, what one Synod Father called “revolutionary,”teaching on marriage and the family. It invokes repeatedly and in a confused manner principles which are not defined, for example, the law of graduality."


The relatio was largely seen as being in agreement with Cardinal Kasper of Germany's proposal to change the Church's discipline that those who had divorced and remarried (without having their first marriage investigated and found to be sacramentally invalid) were unable to present themselves to receive Holy Communion (see Mt. 19:9; 1 Cor. 11:28-32). Over the past year, when giving interviews, Cardinal Kasper had presented his proposal as representing Pope Francis' own wishes for a change in discipline. The release of the relatio - granted, only a working document - was still taken by the mainstream media as a confirmation of this.


When Cardinal Burke was asked about how important he believed it was for Pope Francis  to make a statement reaffirming, for the faithful, the ancient, orthodox teaching of Christ and the Church on this serious matter, the Cardinal replied:

"In my judgment, such a statement is long overdue. The debate on these questions has been going forward now for almost nine months, especially in the secular media but also through the speeches and interviews of Cardinal Walter Kasper and others who support his position. The faithful and their good shepherds are looking to the Vicar of Christ for the confirmation of the Catholic faith and practice regarding marriage which is the first cell of the life of the Church."


And I have seen how the mainstream media has pounced: "Cardinal Burke at odds with Pope Francis." No.  The Cardinal retains his complete allegiance to Pope Francis as the Vicar of Christ. In his words, at every step, Pope Francis has articulated Christianity's ancient understanding of Christ's words on the indissolubility of marriage, as well as how marriage is constituted by the union of man and woman.  What Cardinal Burke has given voice to is the confusion he sees being expressed among the faithful, in response to the relatio and its coverage in the media; and how the Cardinal sees Pope Francis' silence as adding to the misunderstanding. It cannot be easy for Cardinal Burke to say that, but I believe he does so out of a sincere love for Pope Francis and the entire Church.


My mind immediately goes back to the disagreement between Paul and Peter recounted in Galatians.  Paul, who had nothing but respect for Peter, and recognized the preeminent authority entrusted to him by Christ (Gal. 1:18; 2:1-2, 7-10), took issue with Peter's behavior.  Yes, Peter who had so clearly articulated God's welcome of the Gentiles into the Church - and without need for them to follow the ceremonial portions of the Mosaic Law - was behaving as if those things were necessary...and in the process, causing confusion.  And so Paul tells us how:


"...when Cephas [Aramaic for Rock, Peter] came to Antioch I opposed him to his face, because he stood condemned. For before certain men came from James, he ate with the Gentiles; but when they came he drew back and separated himself, fearing the circumcision party. And with him the rest of the Jews acted insincerely, so that even Barnabas was carried away by their insincerity. But when I saw that they were not straightforward about the truth of the gospel, I said to Cephas before them all, 'If you, though a Jew, live like a Gentile and not like a Jew, how can you compel the Gentiles to live like Jews?' We ourselves, who are Jews by birth and not Gentile sinners, yet who know that a man is not by works of the law but through faith in Jesus Christ" (Gal. 2:11-16).


Cardinal Burke's words should be understood in this same way. And please, I hope no one is jumping to the wild conclusion that papal infallibility is being called into question!  As all of us know, papal infallibility applies only to the Pope's official teachings, (1) as the Successor of Peter, (2) addressed to the entire Church, (3) on matters of faith and morals.  Cardinal Burke is simply pointing out what he believes to be a negative effect of Pope Francis' silence on a matter of great importance. The Pope and the Cardinal are brothers, intent on serving the same Master. In their heart of hearts they both want what is best for Christ's flock. You and I should pray that the Lord remove every obstacle that might stand in the way of that goal. Pray for Pope Francis, and please pray for all who, with him, and under his authority, share the responsibility of shepherding the Lord's flock.
Posted by Shane Kapler at 5:10 PM 2 comments:

The Lord Loves a Sharp-Dressed Man 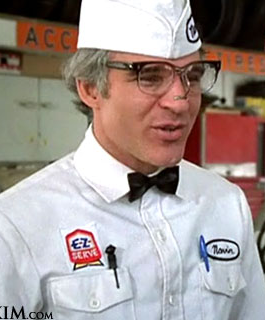 "Lord loves a workin' man" - so saith Navin R. Johnson, of 1979's The Jerk. I am sure Navin was right, but today's Gospel reminded me that the Lord also loves a properly attired-man.

In Matthew 22, the Lord Jesus compared the Kingdom to a king who threw a wedding feast for his son. When the invited guests ignored the king's invitation and murdered his servants, the king sent his soldiers to burn their city (an image of Rome's sack of Jerusalem in 70 A.D., in response to the repeated actions of its leaders). The king then dispatched more servants:

"'Go therefore to the thoroughfares, and invite to the marriage feast as many as you find.’ And those servants went out into the streets and gathered all whom they found, both bad and good; so the wedding hall was filled with guests.But when the king came in to look at the guests, he saw there a man who had no wedding garment; and he said to him, ‘Friend, how did you get in here without a wedding garment?’ And he was speechless. Then the king said to the attendants, ‘Bind him hand and foot, and cast him into the outer darkness; there men will weep and gnash their teeth.’ For many are called, but few are chosen" (Mt. 22:9-14).

As in the parables of the wheat and the tares (Mt. 13:41-42), and the net containing both good and bad fish (13:47-50), the parable of the wedding feast reminds us that Christ's Kingdom on earth, His Church, is made up of both the righteous and unrighteous. Professing Jesus as Lord and Savior and receiving Baptism are incredibly important, but they are just the beginning.  To enter the wedding banquet - the life of Heaven and the establishment of the Kingdom in power at the end of time - we have to put on the right garments, and towards the end of the Book of Revelation we are told what they are:

"'Let us rejoice and exult and give him the glory,
for the marriage of the Lamb has come,
and his Bride has made herself ready;
it was granted her to be clothed with fine linen, bright and pure'—
for the fine linen is the righteous deeds of the saints.
And the angel said to me, 'Write this: Blessed are those who are invited to the marriage supper of the Lamb'" (Rev. 19:7-9).

Proper wedding attire = righteous deeds.  A well-dressed man and workin' man are one and the same! (I always felt Navin was a lot more clever than people gave him credit for.)  Or as James concluded, "You see that a man is justified by works and not by faith alone" (Jas 2:24).

If you want to read more about the synergy between faith and works, you may want to look here and here. 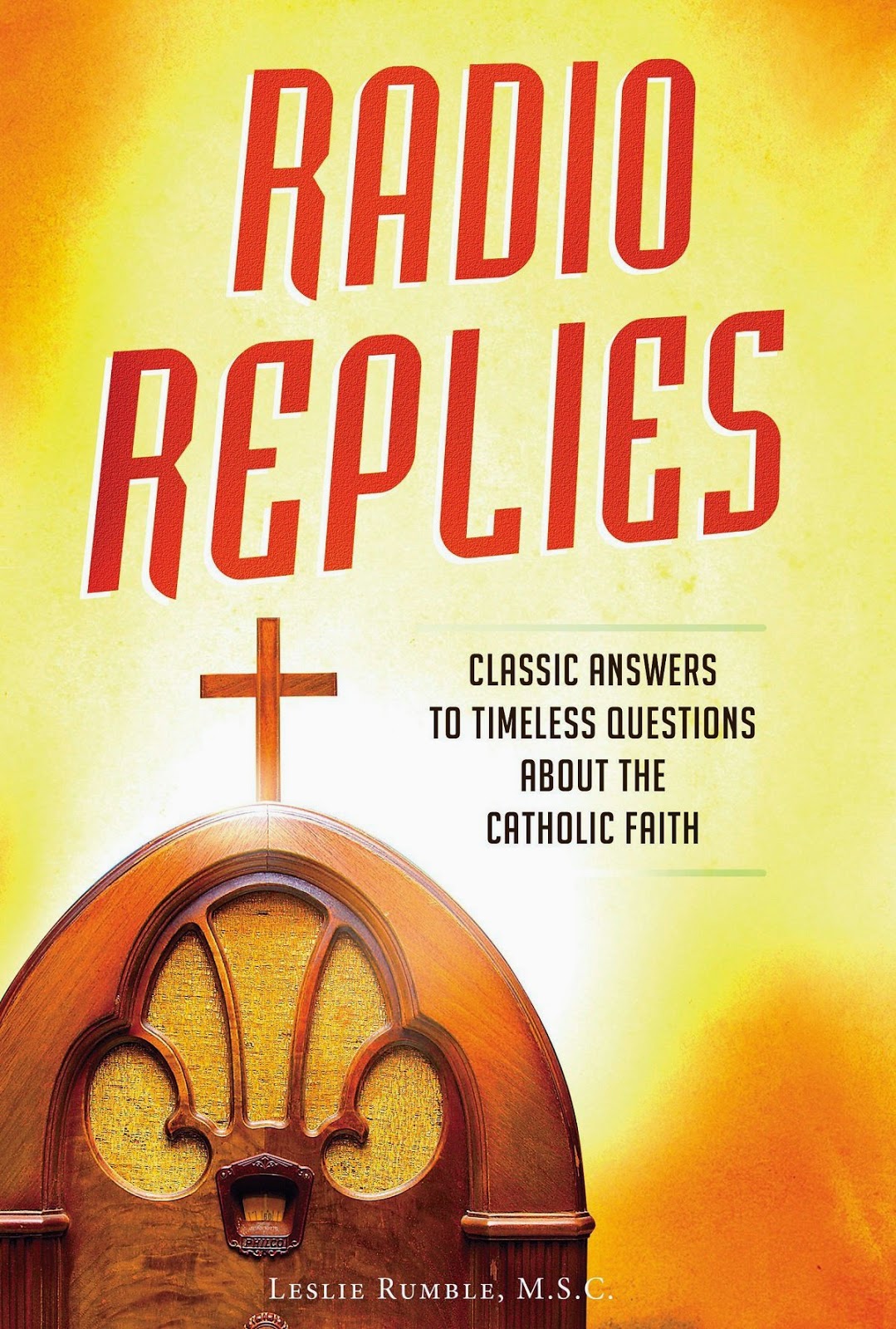 Radio Replies is more than a gem; it’s an apologetic gold mine.  Father Charles Rumble was the original Catholic radio apologist in the 1920s and 30s. His answers to a whopping 4,374 questions were originally published as a three volume set.  Todd Aglialoro (editor of Catholic Answers Press) has now produced a one-volume abridgment consisting of 836 answers to the most important questions facing today's apologist.

I was thrilled that Catholic Answers retained Abp. Fulton J. Sheen's Introduction to the First Edition. (Sheen was but a “lowly” Monsignor at the time). You are no doubt familiar with his quote, “There are not over a hundred people in the United States who hate the Catholic Church...” Well, this is the source! By themselves, Sheen’s nine pages are worth the price of the book: “If you would find Christ today, then find the Church that does not get along with the world…Look for the Church which is accused of being behind the times, as our Lord was accused of being ignorant and never having learned.” The Introduction is a masterpiece and yet, only an appetizer to the feast that follows.

Father Rumble used his immense knowledge, keen reason, and razor-sharp wit to succinctly answer questions as relevant today as they were almost a century ago.  He tackled questions of faith and science, God’s triune nature, the Incarnation, sacraments, authority of the Church, and Blessed Mother.  He answered the same questions of morality – contraception, euthanasia, overpopulation, abortion, suicide – that we face on a daily basis, even addressing matters of social justice.  I found myself amazed, time and again, at the way Rumbles’ answers became part of our modern apologetic patrimony. Like Catholic Answers-Live today, no topic was off limits.

At 450 pages, Radio Replies – Catholic Answers Edition  has the apologetic girth of an entire shelf of similar books. You'll definitely want this for your collection. (Also available in e-book, at a sweet price!)
Posted by Shane Kapler at 2:22 PM 1 comment: