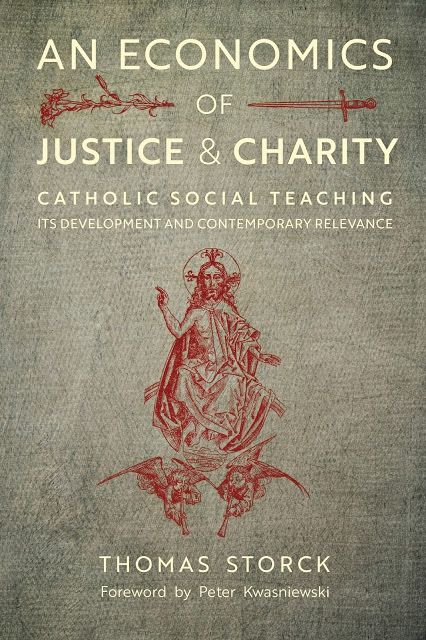 I have spent the past year delving into the Epistle of James, looking at the epistle's Jewish roots as well as how its inspired author's thought has continued to unfold within the Church's meditation and subsequent teaching. James had a number of things to say about the proper relationship between capital and labor, the rich and the poor; and it left me wanting to understand the Church's social justice teaching, specifically in regards to economics. I had heard phrases such as, "a preferential option for the poor," and "just wage." I knew of the Church's opposition to communism and that Leo XIII's Rerum Novorum began a series of papal teachings on the topic of social justice; but I felt ill-prepared to dive immediately into such deep waters. I needed a trustworthy guide - ideally an orthodox, one-volume overview of the subject. Archbishop Sheen's Justice & Charity (TAN, 2016) was, of course, excellent; but Sheen penned his lectures in 1938, before John XXIII, Paul VI, John Paul II, and Benedict XVI made their decisive contributions.

I couldn't help but feel that Providence intervened when I received Angelico Press's email blast announcing the release of Thomas Storck's An Economics of Justice & Charity: Catholic Social Teaching, Its Development and Contemporary Relevance. It was exactly what I was looking for. Storck takes readers through all of the pontificates from Leo XIII to Francis, providing historical context and explaining the key points of their social justice encyclicals and speeches.

As an already-accomplished author and contributing editor of The Distributist Review, Storck's prose and analysis is impeccable. When I finished the book I felt like I had a decent enough grasp on the salient points to begin tackling the papal encyclicals for myself. (Links to the encyclicals at the Vatican website are provided after this review.) Prior to reading An Economics of Justice & Charity, I had no idea that the Church defined a "just wage" as one that allowed a man to care for his family, without need for his wife to work outside of the home. I was amazed to find Pope Pius XI advocating for "profit sharing" in the 1930s! I appreciated the popes' analysis of socialism as a reaction to laissez-faire capitalism. Storck's analysis of John Paul II's Centesimus Annus was especially detailed, and he supported his points well. He also provides an appendix wherein he seeks to explain the Church's ongoing opposition to usury.

If you want to delve into the untapped treasure of the Church's social justice teaching, An Economics of Justice & Charity is the place to begin. Storck is an ideal guide to explore the papal magisterium on this subject.
_____________________________