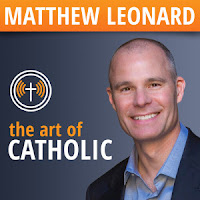 I recently had the opportunity - on my birthday no less! - to record a podcast with Matthew Leonard, Executive Director of the St. Paul Center for Biblical Theology. I've written about Matthew's work before, so having the chance to talk with him about The Epistle to the Hebrews and the Seven Core Beliefs of Catholics was a huge honor. Matthew has released our chat in two parts. Here are links to each with a brief description of the content:

Part 1
• Who wrote Hebrews and why it’s one of the most argued topics in Scripture study
• Why Hebrews has special relevance today given the current condition of the world
• How Hebrews bridges the gap between the Old and New Testaments
• The Jewish background of Hebrews (does that sound redundant?)
• How the doctrine of the Trinity is unveiled in Hebrews

Posted by Shane Kapler at 6:33 PM No comments:

Book Review: "The Porch and the Cross" by Kevin Vost 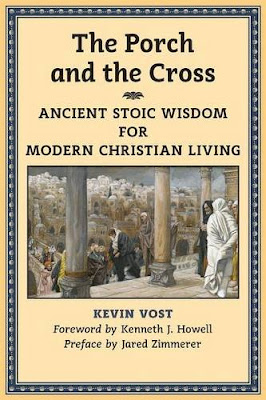 Christianity has long held that our Faith is a reasonable one. From the recognition of God’s existence to the right use of our sexuality, human reason powerfully reaffirms our deepest convictions as Catholics. Not only do we Christians need to be able to present our beliefs in a logical way, but as our society descends further into secularism it behooves us to be able to show how the traditional understanding of morality and family life are not simply “antiquated religious notions,” but are demonstrably true to any person willing to employ their reason in living according to nature. This is where philosophy, and Stoic philosophy in particular, has always been of value to Christians. As St. Justin Martyr explained in the second century, “In moral philosophy the Stoics have established right principles, and the poets too have expounded such, because the seed of the Word was implanted in the whole human race” (Second Apology VIII, 1). And that brings me to the new book from my friend Dr. Kevin Vost, The Porch and the Cross: Ancient Stoic Wisdom for Modern Christian Living. I am incredibly gratified that Angelico Press recognized it as an ideal complement to my work of biblical exegesis/apologetics, The Epistle to the Hebrews and the Seven Core Beliefs of Catholics.

In The Porch and the Cross, Dr. Vost introduces us to the lives, teachings, and legacies of four of the most influential Stoic philosophers – Musonius Rufus, Epictetus, Seneca, and the Roman Emperor, Marcus Aurelius. (Amazingly, two were historical contemporaries of the Lord Jesus; we even read of Seneca’s brother, Gallio, in Acts 18:12-27!) Unless you are already steeped in the Stoics, I have no doubt that, like me, you will be amazed at what you discover in this book.

Allow me to follow Dr. Vost’s lead and begin with Musonius Rufus. The man was a first-century “pro-life” activist! Not only did he publicly protest the gladiatorial games in Athens, but he also extolled the ancient laws prohibiting abortion and contraception. He taught that marriage was the natural union of one man and one woman, entered into for the beauty of life-long companionship and the welcoming of new lives (hopefully, many new lives) into the world. Parents, and not an amorphous state, bore the responsibility for educating their children –and that applied equally to sons and daughters (since both possessed the same powers of reason).

Dr. Vost then presents us with pride of the Stoics, Epictetus – the slave (his very name means “acquired”) who gained his freedom and rose to prominence as a professional philosopher. Epictetus taught that happiness, no matter one’s state in life, lay in interior freedom. It is what we say to ourselves, and not our circumstances, that determine our emotions and actions; and it is our moral purpose that distinguishes us from animals. He addressed practical means of growing in virtue and combating what we Christians would come to call the seven deadly sins. Is it any wonder that his Handbook was adapted for use in Christian monasteries? Further, Epictetus’ insights  served as the basis for psychotherapists Albert Ellis’s rational-emotive therapy and Aaron Beck’s cognitive therapy.

I realize that I have two Stoics yet to discuss: Of Seneca let me simply note that his maxims were especially loved by the early Dominicans and that St. Thomas Aquinas made copious use of them when extolling the virtues in his Summa Theologica. (Is there a stronger endorsement?) Dr. Vost’s chapters covering Marcus Aurelius are truly inspirational – a Roman emporer who embraced simplicity, sexual purity, and was convinced that all human beings, no matter their station in life, possessed dignity. Listen to him for yourself: “[M]y philosophy means keeping that vital spark within you free from damage and degradation, using it to transcend pain and pleasure, doing everything with a purpose, avoiding lies and hypocrisy, not relying on another person’s actions or failings. To accept everything that comes and everything that is given, as coming from the same spiritual source” (Meditations, II, 17). It is the grace of Christ that makes it possible for us to do just that!

The Stoics had their short comings, but Christians have always recognized them as powerful cultural allies in explicating a morality rooted in the natural law and the inculcation of virtue. Dr. Kevin Vost’s The Porch and the Cross: Ancient Stoic Wisdom for Modern Christian Living (Angelico Press, 2016) is a much needed reminder that Christianity, and especially Catholic Christianity, has always valued its Jewish and Gentile heritage:  We embrace Revelation and philosophy, faith and reason – all in the service of Christ, Truth incarnate.
Posted by Shane Kapler at 4:07 PM No comments: