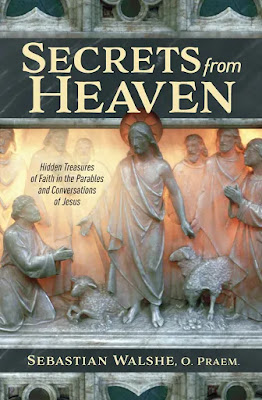 Catholic Answers Press, well known for its apologetic works, continues to widen the scope of its mission. Their latest  offering, Secrets From Heaven, ventures into biblical interpretation - specifically the interpretation of Jesus' parables, healings, and select teachings. The author, Fr. Sebastian Walshe, holds a master's degree in theology and doctorate in philosophy and serves as the dean of studies at St. Michael's Abbey in Silverado, CA. After reading this book I find myself envious of his students, as Fr. Walshe's work is replete with insights I have not seen elsewhere.
We Christians really are so blessed to be part of the Church. The Father allows us to grow beyond our own limited power of understanding by learning from our siblings, endearing us to one another in the process. Secrets From Heaven contains Fr. Walshe's wonderful exegetical insights as well as the spiritual interpretations of the Church Fathers.
The best way to explain way to illustrate the power of this book is to simply take you through a chapter. I've chosen "Jairus and the Woman with the Hemorrhage. The chapter begins with Luke's account of the event (Lk 8:40-56). If you need a quick refresher: Jesus was approached by Jairus, a ruler of the synagogue, to come and heal his twelve year old daughter who was dying. While on the way, a woman who had suffered with a flow of blood for twelve years touched the hem of Jesus' garment and was healed. By the time Jesus arrived at Jairus' home, the child had died; but the Lord raised her.
Father Walshe begins by looking at the events in relation to what has already occurred in Luke's gospel, contrasting Jairus with the centurion seeking healing for a servant in Luke's previous chapter:

"The weakness of Jairus' faith increases his own suffering. Had his faith been perfect like that of the centurion, there would have been no long and anxious journey back to his home, and his daughter would not have died along the way.
Our own defects in faith end up adding unnecessarily to our suffering in life. Often, Jesus wants to solve our problems right away, and he wants us to have confidence that they are solved as soon as we ask him (even when we can't see yet that they are solved) so that we can go about our lives in peace and joy. But we are the ones who limit his goodness: we insist on seeing the results we want right now; we insist on feeling Jesus' constant presence along the way; and consequently we pay the price" (p.113).

After a memorable personal illustration of that point, Father Walshe then delves into the literal sense of the text, or what Luke, writing in Greek in the first century, meant to communicate to his readers. And Fr. Walshe has a keen set of eyes! He begins with the "coincidence" of Jairus' daughter being twelve, the same number of years the woman had suffered from the flow of blood:

WOW - what an incredible insight! Luke is my favorite gospel and yet, as many times as I've read it, I never made that connection. But there's more. (Pardon my underlining):

"[This] is the only time in all the Gospels that Jesus calls someone his daughter. Why here? Why now? In order to call Jairus's attention to the fact that he was not the only person there who had a daughter in need of healing. Twelve years before, this woman began to hemorrhage. As a result, the woman would have been made ritually unclean by her flow of blood, and therefore would certainly have been excluded from participating in the worship at the synagogue where Jairus was an official, lest she contaminate anyone who had the duty of sacred worship. Indeed, it seems likely that it was Jairus himself who excluded her from the worship at the synagogue, since he was the ruler there. For twelve years this woman was excluded from the house of her Father, while for twelve years Jairus enjoyed the company of his own daughter in his house....What was going on in [Jairus'] heart at this moment? Was he angry at [this woman] for holding Jesus up?...By causing Jairus to reflect on the condition of his own daughter, and upon the pain he now felt at being separated from her, Jesus willed to arouse in Jairus a new sense of compassion for this woman whom he had not recognized as God's daughter."

Fr. Walshe draws an application from this:

He sees other lessons for us, but for the sake of space I'll limit myself to one more - what caused Jairus and the woman to respond to Jesus with an imperfect faith:

"[They] seem to have some reason why they can trust in their own merits. Unlike the centurion, Jairus is a member of the Jewish people, and even a ruler of the synagogue; the woman is someone of substance who apparently started out with a lot of money that she ended up spending on doctors. They had something to hang their hat on other than the mercy of Christ. And so for them Jesus was not their first resort but their last resort.
To the degree that we rely upon our own talents, natural gifts, worldly wealth, or status, to the same extent we will put Jesus last and end up resisting the seed of the word that Christ wants to plant and bear fruit in our hearts. And yet in the face of all this, we should take some consolation in this fact: that in spite of their imperfections, Jesus does eventually give them what they need" (p.117).

After plumbing the literal sense, Fr. Walshe turns to the spiritual sense as expounded by Sts. Bede and Ambrose:

"According to this allegory, Jairus, since he is the leader of the synagogue, represents the Jewish leaders. His daughter represents the Jewish people, and the woman with the hemorrhage represents the gentile people. Jairus daughter has lived for twelve years in the home of her father, and this signifies that the Jewish people have lived withing the Jewish church during the whole time of the covenant with the twelve tribes of Israel (Ex. 34:27). On the other hand, the gentiles were excluded from this covenant (unlike the covenants made with Adam and Noah that included all their descendants, Jew and Gentile alike). Thus, the woman is said to have a flow of blood for twelve years, to signify that during the time of the Mosaic covenant the gentiles were unclean and excluded from the assembly of God. During this time they spent all their substance on physicians, that is, they sought in vain for salvation from philosophy or false gods" (p.119).

Father Walshe goes into this allegory in some depth, and it is beautiful. He brings the chapter to a close by considering how we should personally be evangelized by this episode from the gospels and how we should take these lessons under consideration when sharing the Gospel with others.
Secrets From Heaven is a spiritual gem. I'll keep my eyes peeled for Fr. Walshe's next offering.
Posted by Shane Kapler at 7:47 PM